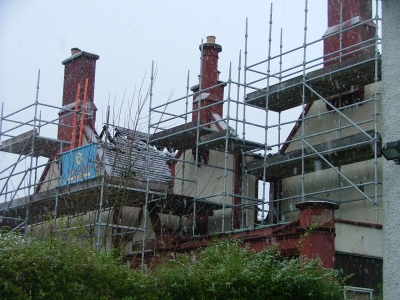 Viewhill is a category B listed building and occupies a prominent site overlooking the river in the centre of Inverness. Dating from 1835, the building is of considerable heritage merit, both for its architectural significance and for its association with Joseph Mitchell who was a civil engineer who worked with Thomas Telford on the Caledonian Canal, and on the railway, the first sewerage system, extraction of the first water supply from the Ness and through his involvement with many road building schemes. Viewhill was built as his primary residence.

Viewhill was last in use as the Inverness youth hostel. In 1998 the Scottish Youth Hostels Association declared the building to be surplus to requirements and it was put on the market. The building was acquired by a local building firm, Ewen Gillies, in September 2001 but was subsequently acquired by Magnus Properties. However the company gave up on its plans to redevelop the property, following the virtual destruction of the building by fire in September 2007.

Viewhill House was designed by and built for Joseph Mitchell, a civil engineer who undertook many projects throughout the Highlands including works with Thomas Telford on the Caledonian Canal but his achievements also included the first sewerage system in Inverness, the extraction of the first water supply from the Ness and many road building schemes. Mitchell's reputation however is founded principally on his skill as a railway engineer. He carried out surveys for the railways and was involved in the construction of much of the rail network in the Highlands, including the Perth to Inverness line. Mitchell’s story has long been subsumed by that of his mentor Telford, and it is only in recent years that his considerable talents as a Civil Engineer have been acknowledged.

Currently, the Highland Historic Buildings Trust (HHBT) is working with various agencies towards our goal of securing funding to save Viewhill House for its conversion.

The Highland Council are fully supportive of the principle of the reuse of Viewhill House and are supportive of the approach to reuse the listed building for the proposed preferred use identified by HHBT in the Options Appraisal.

Historic Environment Scotland (HES) continue to be very supportive of finding a long term sustainable use for Viewhill House and it would be pleased to continue working with all parties towards achieving this goal.

HHBT is seeking to develop the business case for an end use and to source substantial funding to restore the property and equip it for its new use.  HHBT propose to submit an application to the Heritage Lottery Fund (HLF) seeking funding from the Heritage Enterprise Programme (HE) the focus of which is on an end use that will generate a sustainable commercial income.  The HE programme is designed to help bridge the funding gap where the existing value of the asset plus the cost of bringing it back into use is greater than the value of the asset after development has been completed.

The HLF has suggested that HHBT look to introduce "an additional end use to balance the development", and it has advised that this end use should preferably incorporate a strong community support/involvement and demonstrate that it will benefit not only the local economy but also the community, as a great deal of weight is given to such involvement in the assessment of an application to the Heritage Enterprise Programme.

To provide the "additional end use", consideration is currently being given to the provision of an organised presentation and display of the life and achievements of Mitchell and in particular the Highland Railway which ran from Perth to Inverness and then on up the east coast to Wick and Thurso.

In seeking to save the building which is a landmark building on the skyline of Inverness and is of considerable social significance to the city, the Trust sought funding to undertake an Options Appraisal in order to look at the key conservation issues affecting the building, examine all options and consider in outline the viability of the most beneficial option. It would also explore all possible sources of funding for the project.

From the Options Appraisal, in which six potential end use possibilities were examined, the Board of HHBT was advised that Viewhill House can be saved and restored subject to the necessary funding from a number of agencies as well as a business partner.

The next stage will involve  seeking development funding in order to develop the proposal, to explore in more detail the business case for a sustainable use for Viewhill House.

There is no doubt the current condition of the building presents a conservation challenge and that a new use would involve a substantial amount of replacement rather than conservation, requiring a pragmatic approach whilst recognising the primary significance of the building.

As the earlier initiative to attract an operator to restore Viewhill House as eight serviced apartments was unsuccessful, the Trust have been in discussion with Impact Hub Inverness, an Inverness-based Community Interest Company that operates a co-working space in Castle Street Inverness, and delivers contracts that support the start-up and growth of social enterprises in the Highlands and Islands and beyond, to explore potential conversion of the property into serviced offices. Viewhill House was designed by and built for Joseph Mitchell who undertook many projects throughout the Highlands including works with Thomas Telford on the Caledonian Canal, the first sewerage system in Inverness, the extraction of the first water supply from the Ness and many road building schemes. Mitchell's reputation however is founded principally on his skill as a railway engineer. He carried out surveys for the railways and was involved in the construction of much of the rail network in the Highlands, including the Perth to Inverness line. The revised proposals for Viewhill House will include a feature devoted to the life and achievements of the civil engineer.