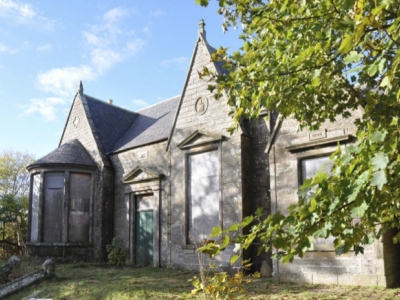 Traill Hall is a category B listed building which occupies a prominent site on the entrance to Castletown village and is of considerable heritage merit. Since it was gifted to the people of the parish of Olrig by Margaret Traill in 1866, it has played an important role in local civic life. Originally used as a public hall and reading room before becoming a social club, it was a temporary school and services canteen during World War 2. Traill Hall was unoccupied and at risk since the 1990’s when it was ultimately used as a store for a local freezer company. At a public meeting in December 2004, it was unanimously agreed that the derelict building should be saved for the local community.

In 2014, following the successful conclusion of phase one - the feasibility study for the restoration of Traill Hall - which indicated the building is capable of renovation and that there is a need for it in the community, the Traill Hall Community Trust started phase two of the project, comprising a community involvement programme. However, attempts to get the hall back into public use have proved unsuccessful and it has been decided to put the building on the market.

Following a competitive tender process the then Historic Buildings Preservation Trust (HBPT) was appointed by the Traill Hall Community Trust which was established in December 2007 as a registered charitable company to co-ordinate an options appraisal into the repair and re-use of the building. The HBPT undertook a competitive tendering exercise based on cost and quality to appoint a design team which would provide the necessary expert advice. It was concluded that there was a potentially sustainable end use for Traill Hall as a community owned asset which could deliver a modest annual surplus of income over expenditure. Of the three options considered in the appraisal, the preferred scheme would involve restoring the existing building, rebuilding the extensions and undertaking major internal works including the creation of a first floor gallery space. There was substantial support for the hall’s use as a childcare facility but to have the capacity to host a range of uses such as Internet access/café/tearoom/wedding venue.

Financial assistance towards the options appraisal was provided by the Architectural Heritage Fund, Highland LEADER and Awards for All.