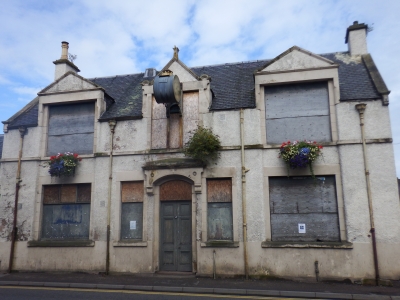 Merkinch Welfare Hall was built in 1914 to house a temperance group who sought to attract young men away from the dangers of alcohol in the years leading up to the Second World War. A key building in the townscape of Merkinch, the hall played a central role in the local community over the past 100 years as a home to Clachnacuddin FC and Inverness Judo club as well as other uses such as dentistry for servicemen.  On the Buildings at Risk Register, the building has lain empty for twenty or more years and has suffered from serious water ingress and resultant damp.

The project was delivered by the Trust on behalf of the building owners, Merkinch Enterprise over a two year period, ending in November 2010, with the production of a comprehensive Options Appraisal which, in general terms, showed:

In 2014 Merkinch Welfare Hall was acquired by Merkinch Enterprise. Funding for a £1.2m project came from the Heritage Lottery Fund, Inverness City Heritage Trust, The Highland Council, The Scottish Government, Highlands and  Islands Enterprise, Robertson Trust, Maple Trust and the Architectural Heritage Fund. The project has restored the building to its former glory, creating a gym and changing rooms on the ground floor, used by the City Boxing Club, and Merkinch Partnership, a local charity providing community support, on the first floor.

The overall cost of the Options Appraisal was £ 30,197 and was financed as follows: