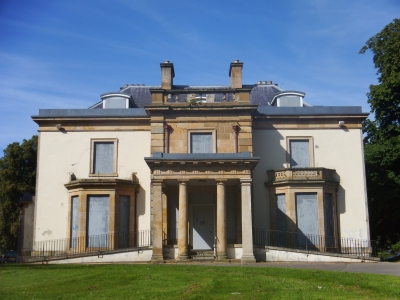 The mansion house known as Grant Lodge is a category B listed building and forms the focus of an important designed landscape in the centre of Elgin. It is thought to date from the mid eighteenth century although the building was remodelled extensively in the nineteenth century for the Countess of Seafield. It was gifted to the Council in the early 20th century for the benefit of the inhabitants of Elgin and has occupied an important role in civic life since then, most recently as the library and archive. In 2004 the library service relocated to a modern building in the park and the disused building was subsequently damaged in an arson attack which has left it vulnerable and at risk.

The Trust was commissioned by Moray Council to co-ordinate a feasibility study into the repair and re-use of Grant Lodge. The purpose of the study which was completed in July 2002 was to establish whether there is a viable new use for Grant Lodge, whether it is repairable, how much the proposed repair and conversion works would cost and whether it is fundable. It has been concluded that whereas there is a potential sustainable end use as an arts centre and whilst this use would comply with the original deed of gift, in the financial climate and with the absence of support from HIE Moray, it was uncertain whether the necessary partnership funding could be secured. Estimates of the project were around £2.5 m.

It is hoped that Grant Lodge can be reopened as part of the £100 m growth deal package for Moray as part of a “cultural quarter” project. The UK Government has committed £3.5 m, with local organisations pledging £14.9 m to projects including reopening the building as a visitor centre, showcasing the area’s heritage and food and drink industries.

The study was funded by the Architectural Heritage Fund, Moray Council, and HIE Moray.