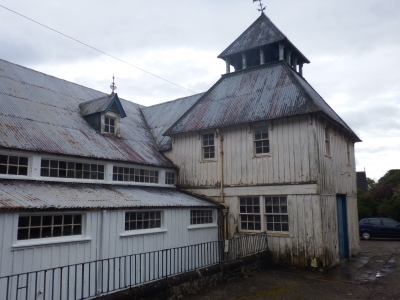 The building was built by Sutherland Estates in the late 19th century and was used as a drill hall by the Territorial Army, although it also played a significant role in village events. It comprises a large low-aisled big-roofed building, predominantly timber construction. A house adjoins at the front left apparently a later addition of c.1910. The hall surrounds a later 19th century red sandstone caretaker`s house at the rear.

Whereas Sutherland Estates indicated a willingness to dispose of the building, and although it was marketed for a year without success, there was a strong desire in the local community to see the building remain available for community events. The Trust were asked by the Golspie Community Council to undertake a feasibility study into the options for the repair and re-use of this redundant category B listed building, following concern at its deteriorating appearance in such a prominent location on the main road.  The study addressed the need for some form of commercial activity in the building to cross subsidise the community use. Although a number of options were investigated, the project was not considered to be viable due to the prohibitive costs of putting in a new access and parking area off the A9, which was a requirement of the Scottish Executive as trunk roads authority.

The Architectural Heritage Fund and the Highland Council contributed towards the costs of the study.