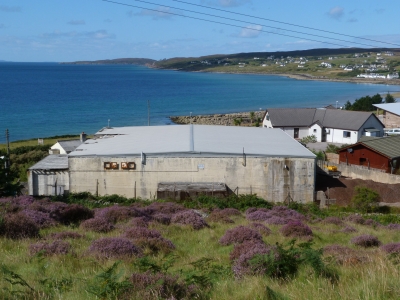 Since 1977 the Gairloch Heritage Museum has been a successful, award-winning tourist attraction but it was required to vacate its premises by 2015. The Highland Council agreed that the redundant ‘Roads Depot’ (known locally as the ‘Old Radar Station’) in Achtercairn could be sold to the Gairloch and District Heritage Company for the sum of £1 to be developed as a viable heritage and community centre. The building comprises a monolithic, blast-proof structure which was built in the early 1950s Cold War period as an A.A.O.R. (Anti-Aircraft Operations Room).

In 2011, a feasibility study completed by David Somerville Architects concluded that re-location of the Gairloch Heritage Museum to the Highland Council’s former roads depot was potentially viable, subject to the availability of funding to cover the £1m capital costs of the conversion works. In the following year, on behalf of the Gairloch and District Heritage Company, and as a contribution to a Development Project, the Trust prepared a Business Plan which would not only support this conclusion but would also enable the museum to develop its strategic role in the area, develop new activities and learning opportunities and crucially to increase its earned income, possibly through partnerships with local businesses and the community.

An Options Appraisal which was undertaken in house satisfied the Heritage Lottery Fund that the former nuclear bunker was the best option for the Museum. Through a procurement process, Mia Scott Associates was appointed as Project Coordinator and architects LDN were chosen to develop the project. In 2017 Gairloch Heritage Museum obtained a grant from the Heritage Lottery Fund to transform the building into a new museum for Gairloch. The project ran from 2012 to 2019 and was officially opened on 9 July 2019 by the Princess Royal. The Project has had a very successful outcome with its nomination in 2020 as ‘Museum of the Year'.
See: https://www.gairlochmuseum.org/museum