Chapel of The Sand of Udrigil 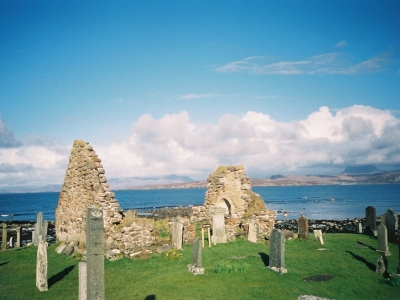 Set in a stunning position overlooking Gruinard Bay, by Laide in Wester Ross, the Chapel of the Sand of Udrigil is a ruined mediaeval chapel. Although the chapel itself is mediaeval, the site is said to have links with St Columba stretching back to the 6th century. Regular worship in the chapel ceased in the late 18th century, and the chapel became roofless during the 19th century, although the surrounding burial ground is still in use. The chapel is now a scheduled ancient monument.

The local community initially expressed concern over the condition of the surviving east gable, which had become precarious. The Highland Council responded and carried out emergency shoring work in 2002 to prevent any further collapse and the building was fenced off from the public. The local Councillor for Gairloch approached the Trust for help and a feasibility study was undertaken to establish whether the building was repairable and to identify the most appropriate method of repair. Peter Stephen and Partners the consultant engineer, designed an ingenious solution using bagged lime cement to consolidate the fractured east gable which was then tied back to the building using high tensile steel. Funding was secured to enable the consolidation works to proceed in summer 2003, including a substantial contribution raised locally by members of the community determined to see the chapel preserved for future generations. The building is now once again open to the public.

The total project cost was £43,000 and funding was secured from the following sources: Local fund raising, the Heritage Lottery Fund, Historic Scotland, RACE, and the Highland Council.