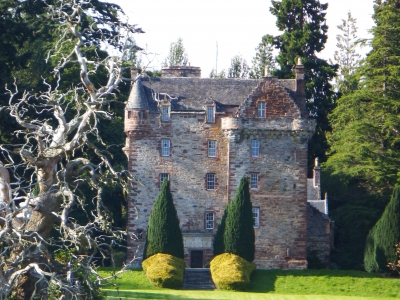 Castle Leod is a category A listed building located on the outskirts of Strathpeffer. It is a five storey tower house and is thought to date from the sixteenth century, although there is evidence of earlier stonework dating from the fourteenth century in the vaulted lower chambers. The castle has evolved considerably from its origins as an L plan tower house and the later additions to the north now form the home of the Earl of Cromartie, Chief of Clan Mackenzie and his family. The unoccupied old tower is now under a 99 year lease to the Clan Mackenzie Charitable Trust (CMCT). Extensive repairs to the roof of the old tower were undertaken in the early 1990's however the tower continues to suffer from endemic dampness and extensive conservation work is needed to all floors.

The Trust was approached by the CMCT in 2002 to co-ordinate a feasibility study to investigate the potential for the re-use of the upper floor space of the tower, as a vehicle for securing a comprehensive scheme of repairs. Following a competitive tendering exercise a design team led by LDN Architects was appointed. During the assessment of the applications for funding, concerns were raised over the lack of physical and legal separation between the Cromarties and the old tower. The family subsequently decided that the conditions of the public funding route were too onerous.

The Architectural Heritage Fund, The Highland Council and Ross and Cromarty Enterprise were approached for funding.