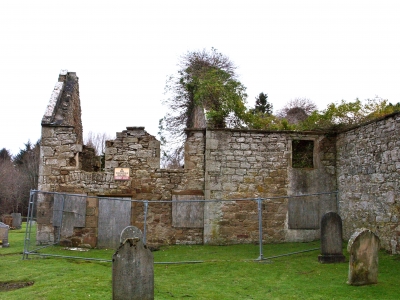 Within the burial ground of Alness is the roofless remains of Alness Old Parish Church which is thought to have been reconstructed in 1775 and which was unroofed in 1970. Occupying a commanding site overlooking the Cromarty Firth, it is one of an important grouping of distinguished Post-Reformation churches of the eastern seaboard of Scotland. Originally, the church would have been the focus of a medieval settlement before the town of Alness moved eastwards leaving the church, manse and former glebe isolated.

Whereas it was one of six priority sites which were identified in the audit of historic kirkyard buildings in Ross and Cromarty previously commissioned and undertaken on behalf of the Trust, Alness Old Parish Church had been the focus of attention and resources by the Trust since 1998 when the Trust submitted a proposal to the owners, the General Trustees of the Church of Scotland to carry out a feasibility study to establish whether there was a viable new use for the building and whether it was repairable and to enhance the understanding of the cultural significance of the building. To assist it further in arriving at an understanding of the significance of the site, assess its condition, risk and accessibility with a view to identifying priorities for action towards its conservation, consolidation and interpretation in partnership with the local community, the local heritage group, Historic Scotland and The Highland Council, the Trust has over the years commissioned a series of studies:

Having been unsuccessful in raising the necessary support and funds to consolidate and interpret the ruins of Alness Old Parish Church, HHBT  have embarked on the development of a heritage trail which includes Alness, and the other Post Reformation churches namely the Gaelic Chapel in Cromarty, Cromarty East Church, Nigg Old Church, Tarbat Old Church, Edderton Old Church, Golspie Parish Church, and Kiltearn Old Parish Church. as well as a number of sites of interest based on the rich farmlands of the Black Isle and Easter Ross around the Cromarty Firth.

The Trust is grateful to Historic Scotland, The Highland Council, and the Highland Leader Programme for the support received in respect of the various studies undertaken so far.