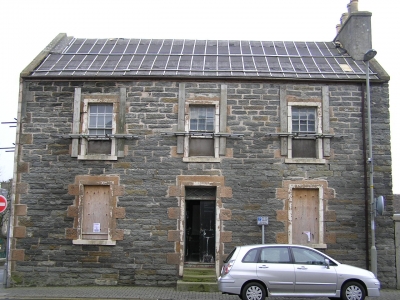 The property is a classical two-storey townhouse dating from c.1800 built of squared Caithness rubble with raised margins indicating that it was originally harled. Despite its poor condition, an elegant oval staircase survives together with some good plasterwork. The building forms part of Sir John Sinclair’s grid iron plan for the new town of Thurso and, due to its pivotal position, makes a signiﬁcant contribution to the townscape. It was last in use as social housing but this ceased some years ago because of the deteriorating condition of the building. Slates, rainwater goods and render were removed following the serving of a Dangerous Buildings Notice by the Highland Council. Should the Council succeed with the compulsory acquisition of the property the Trust were prepared to enter into a back-to- back agreement with the Council.

Following a Compulsory Purchase Order and a Local Public Inquiry, the Highland Council acquired the property and renovation by the Council began in May 2015 to transform it into three one-bedroom flats.

A design team led by LDN Architects was commissioned by the Trust in November 2007 to contribute to an AHF Options Appraisal Report for 30 Princes Street/7 Sir John’s Square, Thurso. This study was based on an original invitation to tender dating from August 2002. The Trust envisaged that if successful the project would be undertaken on a revolving fund basis whereby the sales proceeds from the completed building would contribute to the project costs and the balance of costs sought from a number of sources. The study therefore principally addressed the potential for the re-use of the building in the context of the conservation policies contained within the conservation statement commissioned as part of the study.

Funding for the options appraisal to investigate the repair and re-use of the building was secured from the Architectural Heritage Fund and Caithness and Sutherland Enterprise.